Founded in 1448, the Franciscan Friary known as Muckross Abbey contains the tombs of local Gaelic Chiefains.

This is a building with a violent past. Persecuted by Cromwellian forces under Lord Ludlow, many of the monks were murdered here in 1652.

In the 17th and 18th centuries, the Abbey became the burial place of the three Gaelic poets: Aodhagan O’Rathaille , Geoffrey O’Donoghue and Eoghan Rua O’Suilleabháin.

Today, the abbey is remarkably well preserve, and visitors can get a strong sense of what it was like to live there. The centrepiece of the Abbey is an ancient Yew tree, located on the middle of a cloistered courtyardand is said to be as old as the Abbey itself. 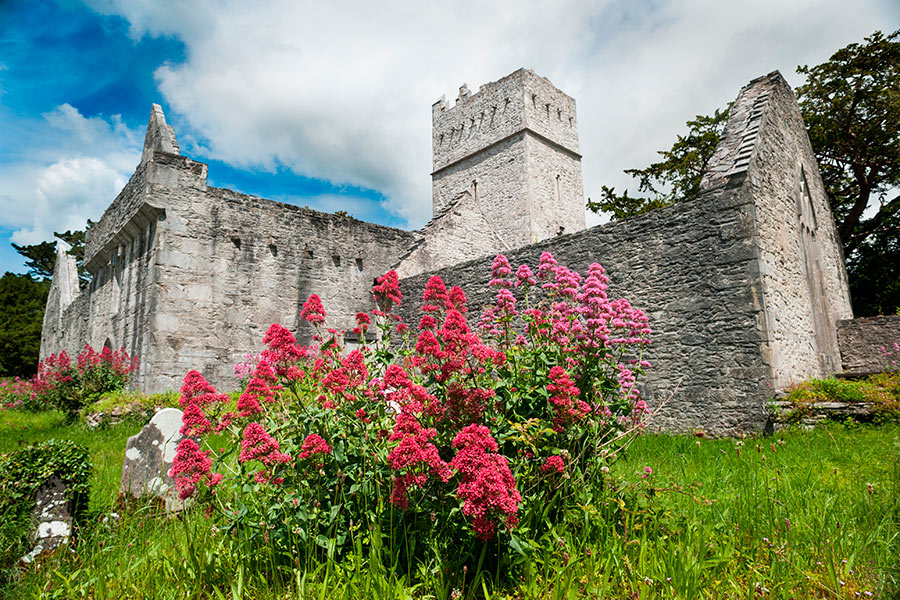 “
If you are in Killarney, do yourself a favour and stay with Serena and her family. Serena made us feel super welcome, her cooked breakfasts are delicious with a focus on locally sourced ingredients and she gave us fantastic tips for Killarney and the area. We followed her suggested route and it was better than the one we had planned initially with our guide book. The room was spotlessly clean and the beds were comfortable.
TRIP ADVISOR

We use cookies on our website to give you the most relevant experience by remembering your preferences and repeat visits. By clicking “Accept”, you consent to the use of ALL the cookies.
Cookie settingsACCEPT REJECT
Manage consent

This website uses cookies to improve your experience while you navigate through the website. Out of these, the cookies that are categorized as necessary are stored on your browser as they are essential for the working of basic functionalities of the website. We also use third-party cookies that help us analyze and understand how you use this website. These cookies will be stored in your browser only with your consent. You also have the option to opt-out of these cookies. But opting out of some of these cookies may affect your browsing experience.
Necessary Always Enabled
Necessary cookies are absolutely essential for the website to function properly. This category only includes cookies that ensures basic functionalities and security features of the website. These cookies do not store any personal information.
Non-necessary
Any cookies that may not be particularly necessary for the website to function and is used specifically to collect user personal data via analytics, ads, other embedded contents are termed as non-necessary cookies. It is mandatory to procure user consent prior to running these cookies on your website.
SAVE & ACCEPT